My due date (August 19th) came and sent.  LeAnn was more patient than I. At my last prenatal appointment with her (August 30, 2011), we talked about options for encouraging labor. We decided that if by the following appointment (Sept. 1st) I hadn't had our little baby girl we would talk about some options. Otherwise, baby was happy, I was happy, and LeAnn was happy, so we waited. Keep in mind, I dilate early and slowly. With my first baby, I was 5cm dilated and not in active labor. At this point in the story, I was 4cm dilated with our baby girl, but also not in labor. On August 31st, my mother came and watched our 20 month old son for the day. My husband and I spent the day walking, eating, laughing, and enjoying each other's company. We both knew today was going to be the PERFECT day to have a baby, so she would just have to come. My mom joined us for dinner, and I told her we were having the baby that night. She laughed because I clearly was not in labor. She said she was going to get going home, but I begged her to stay until 8 because I just knew baby had to come (she was the arranged sitter for out son during the the birth and she lived an hour away).

Wisconsin home birth: Ravanna
I awoke at 12:30 AM Monday June 5th from cramping. It felt like menstrual cramping and as it wasn’t very intense I decided to try and keep sleeping. By 2:00 AM the contractions were becoming more intense so I woke Robert up and told him to start timing them. The contractions were all in my low back and moderately painful. Robert and I worked on getting the birth area set up. We set up the birth tub, started a crock pot meal, and pulled out our birth supplies. My contractions soon became regular with a duration of a 1-1.5 minutes and 4-6 minutes apart. We reviewed our “who to call” list that included the midwife, her assistant, our photographer, my mother, and Robert’s sister. We weren’t sure which midwife to call because our regular midwife LeAnn was out of town but she had stated if it was late enough Sunday evening she wanted to be notified. We decided to try LeAnn first. She told us she was still out of town and to call the back-up midwife. We called her only to be told she was already at a birth and she offered to call another midwife. That midwife was at a birth as well so our back-up midwife called ANOTHER midwife from farther away and sent immediate help in the form of her apprentice and Sarah, a birth assistant.

Email ThisBlogThis!Share to TwitterShare to FacebookShare to Pinterest
Wisconsin home birth: Brooks
I had spent the last few days cleaning everything in the house from top to bottom. Baseboards, vacuumed and mopped under every piece of furniture, scrubbed toilets, windows. Had finally gotten it all done, and as I was going to bed on the 30th, I had that same feeling I had had with Willis: “Now he can come. And I think he might.” But with low expectations.
I woke up that night a lot to use the restroom. When I got up the fourth time, I wasn’t sure if it was back pain or the urge that was actually waking me up. My restlessness was keeping Willis and Tom up. I told Tom that I thought labor was getting closer. I had tried lying down again, but realized I had increased back pain that I couldn’t sleep through or be comfortable through. I told Tom I was going to go take a shower around 5:30am. Things so far were pretty similar to how Willis’ labor got started too, just with less intensity. I wasn’t sure if I was having strong Braxton Hicks or light real contractions, but as I made it to the bathroom downstairs to shower, I realized they were coming every two minutes and lasting nearly a minute, and I wanted to let my midwife LeAnn know. I sent her a text around 6:15am with what I was feeling and that something was happening, just not sure if they would fizzle out. Around ten minutes to 7am, I sent my mom a message that I thought labor was starting so she could start the 2+ hour drive to help us with Willis. I had a few more texts and phone calls with LeAnn, and around 7:10,  she decided she would come out to the house as well.

Email ThisBlogThis!Share to TwitterShare to FacebookShare to Pinterest
Not only are my prenatal visits in depth, a venting session, informative even with the 3rd, and downright comfortable... she lets the littles help and listen to their baby sibling!!! This home birth 'thing' is by far is the best choice (x3) that I have made for our family! Thanks for being awesome LeAnn!! 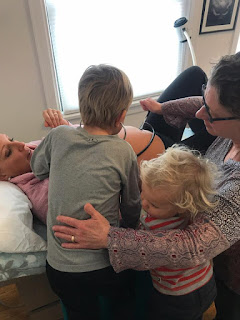 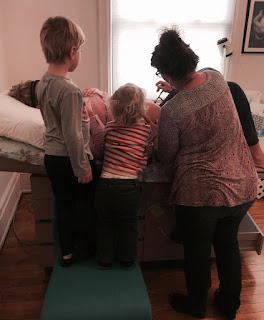 After 21 hours of labor, we had Cormac Faircloth Larson at home on September 6. My labor began with my water breaking on Tuesday at 10:15 p.m. (September 5). After contacting the midwife, we went to bed and tried to get some rest. Contractions began around midnight and by 4 am, they were becoming regular. I was nauseous and throwing up intermittently (this continued throughout my labor, making it difficult to keep food and liquids down). Dehydration was a concern but I kept drinking liquids between every contraction.

My midwife recommended that I write out my birth story and my thoughts on my birth. I already have run over it so many times in my head that I am more than happy to oblige.
Monday morning around 3:30am I had started feeling what felt like a menstrual cramp in my  lower back turn into a charlie horse in my stomach and run all the way to the top of my belly. It kept coming every 20 min or so. I started whimpering because it was quite intense. Tom sleepily put his hand on my shoulder trying to comfort me as I started to cry that I wouldn’t be able to do this if this was early labor and it only got more painful from here on out. (As it turns out, these were my hardest contractions to manage. It was only at the very end did I think the contractions were comparable, but it might have been because I didn’t have time to breathe through these early ones and woke up in the peak of the contraction). I decided I was starving so I got up and showered and made myself a protein shake. Then I went back to bed. I had another contraction that Tom tried to comfort me through that ended up with me in the bathroom puking. I text my boss that I wasn’t sure if I would be at work today but not to count on it, then text my midwife that my contractions were 9 min apart and lasting a minute, and then went back to bed.
Read more » 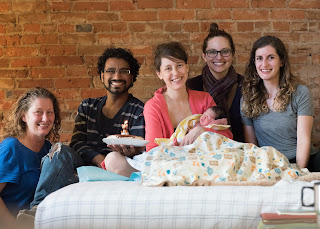 It all started one week ago, the morning before her due date. Ironically, I tried not to tell people Kyla’s due date, since it’s so easy to get fixated on that date and feel anxious as it approaches or disappointment as it passes. I woke up around 2 AM on Sunday, March 6th with some cramps and just restlessness. I got up every hour until 8 in the morning and then slept in. Nick and I spent the rest of the day relaxing around the apartment. My mom, my sister Dawn, and nephew Everett came to visit in the afternoon. We got coffee from the coffee shop below our apartment and went for a walk outside. The cramps and frequent trips to the bathroom continued throughout the day, but I was still in denial that this could actually be the start of labor. My midwife LeAnn called me around 6:30 pm and I told her things were fine - no noticeable pattern of cramping, but they were slightly stronger than earlier in the day.