Silvan’s Birth Story…
For several years before my husband and I even decided on children, I knew that in the event we decided to go ahead with reproducing, I wanted a homebirth. I watched the documentary The Business of Being Born on Netflix, and boy, did it open my eyes. I have personally never been a fan of hospitals to begin with, but after watching that, I just knew that homebirth was going to be the way for me. As long as there were no complications, of course. Luckily for me, my husband, Jake, was fully supportive of this idea.

Fast forward a few years, through the many discussions to finally deciding to try for a baby and taking the leap. A few months after that, we were blessed with a positive pregnancy test.
That’s when the hunt for a midwife began, who was near us, with whom we felt comfortable sharing this life changing experience. I did a few thorough Google searches and my first result was LeAnn in Winona. Only a ½ hour away from our home! There were some others that we interviewed, but LeAnn was the first, and she was most definitely our first choice. She made us feel comfortable in both her knowledge and understanding of where we were coming from, and what we were looking for. It was like talking to an old friend, or family member. She just put us at ease.
I had a remarkably easy pregnancy. I didn’t have any of the typical pregnancy ailments: heartburn, swelling, excessive pregnancy sickness. I definitely counted myself fortunate. Since this was going to be my first child, the closer we got to my “due date” the more we discussed the likelihood that my son would go well past the “due date.” So I was not expecting his sudden arrival 3 days early…
September 18th, 2015 was going to be my last day of work before leave, so I got up as usual and took my 2 ½ mile walk. I wasn’t 5 blocks into my walk when I started having pains. I didn’t think they were contractions because they were centered down in my lower pelvic area, not my entire abdomen, which is what I would have expected. So I powered through them, walking them off as I went about my route. The closer I got to home however, the stronger they became. Still though, I didn’t think much of them. Neither did Jake, when I got home and told him was what happening. But just to be sure, because they were definitely different than what I had been experiencing before and coming at somewhat regular intervals, I called LeAnn before hopping into the shower. She agreed that it didn’t exactly sound like labor and that we would just have to see where things went from there. We said good-bye and I went about getting ready.
The pains continued, getting so much stronger that several times I had to stop and concentrate on breathing through. When I got out of the shower, I vomited. A typical transitional sign. I headed to our bedroom to get dressed but was overcome with another strong pain so I had lay down on the floor and that’s when I noticed for sure that my entire abdomen was tightening with each pain. Again, I vomited.
After a little bit of me trying to get through these “pains,” Jake came upstairs to check on me. I didn’t realize it, but I had been up there for a bit. He asked if I was ok and I remember saying, “I’m trying to be.” I asked for my phone and texted LeAnn to let her know that now I could tell there was tightening and that I had vomited. With that, Jake helped me back to the bathroom so I could use the toilet. I checked and sure enough, there was pink. I looked at Jake and told him that I definitely thought I was in labor now. I texted LeAnn again.
Jake asked if he had time to go grab a coffee, since he had just woken up. I told him that I thought so and he ran off to grab a cup. He wasn’t gone long. Later he told me that he jogged down the block and back to be sure that he was going to be there for me. When he came back upstairs, he calmly suggested that we get down to the bed so if things progressed we would be where we needed to be. I agreed and we started our decent. About ¾ of the way down, my water broke and I was hit with the strongest of (what I now knew were contractions) the pains that I had experienced thus far. I howled and Jake spoke soft, comforting words to me. It was all he could do at the time since we were on our narrow stairway. Once again, I texted LeAnn to now let her know that my water broke. She called back immediately and let us know that she was on the way. 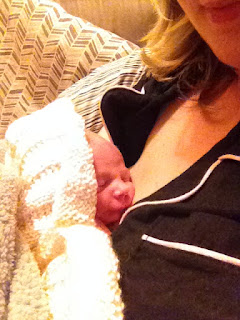 We made our way down the rest of the stairs and to our bed that we had set up in our office. I crawled up on it and howled through several more contractions. Jake asked if he should start setting up the tub. Initially I said yes, but after another all-consuming contraction, I told him to forget it and to push on my hips. At one point Jake texted LeAnn that he was concerned about how close together my contractions were. She let him know that I was just progressing quickly, she was on the way, and to call if I felt the need to push.
It wasn’t long after that text that I suddenly felt that need. Jake called LeAnn and she told him to tell me to try and breathe through if I could. To be honest, I couldn’t. The need to push was so great, I had to do just that. I did, however, try to keep from pushing full force. I pushed more by howling, less by my abdominal muscles. Soon, I don’t know how soon, but soon after I felt the need to push, LeAnn arrived. She relieved Jake for a moment while she got her things set up. More contractions came, and I didn’t hold back much more on pushing at this point. She got me to maneuver a bit so that towels and chucks pads could be put down. We didn’t even have time to put the mattress protector on!
Soon after that, Brandi, the birthing assistant also arrived. Things happened in a blur at this point. I remember LeAnn asking if I could lie on my side because she wanted to check to make sure I was fully dilated to know that my pushing was effective. As she checked she said, “Yep, there’s his head!” And I was so thankful to hear those words. It assured me that I was doing well and that I was going to meet my son soon. They (LeAnn & Brandi) asked if I wanted to change positions. I decided no, because lying on my left side felt comfortable and right.
Another contraction reared up and I pulled my right leg up and began to push with all I had. Pushing felt good, it felt powerful. The contraction passed and I put my leg back down. Many more times I did this until finally LeAnn told me that I was close. That with each push they could see about a ½ dollar amount of the baby’s head. Another few pushes and they asked me if I had my hand mirror and if I wanted to see. The mirror was in the upstairs bathroom and while I did want to see, I felt like it wasn’t important at the time. I just wanted to get him out! After the next contraction they asked if I wanted to reach down to touch his crowning head. I reached down front and couldn’t make it. I tried reaching behind me and was able to feel the little bulge. I remember thinking that I was so close now. So close to seeing and holding my son. Feeling a bit renewed, I continued to put all my strength behind each push. Then I felt it. The ring of fire…
This was the worst part of the actual birth, in my opinion. Even though later LeAnn told me that I only tore in 3 places and that they were tiny tears, pushing Silvan’s head out felt like I was being torn wide open. There was some cussing on my part in that push. Apparently my little guy came out with one hand on his face. No wonder it felt so excruciating! But let me tell you, it was so absolutely worth every bit of pain. 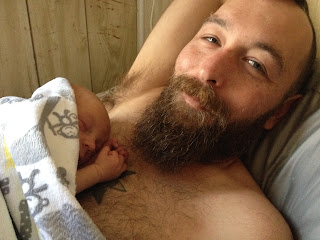 After his head was out, one more contraction and push and out came his little body. I looked down as LeAnn brought him up and lay him on me. I couldn’t believe it. I did it! I had actually done what I set out to do. All the classes, books, appointments, everything led to this very moment and I was in awe. I think the only words I was able to utter at that point were, “my baby, it’s my baby!”
None of it felt real. It was too amazing. Too perfect. It didn’t happen at all like I imagined it would, but the way that it did happen was incredible and made me feel like a warrior. Everything that we tried to plan didn’t happen, which just goes to show that planning isn’t everything. Silvan made his entrance into this world in just 4 hours. I didn’t get a chance to get used to the contractions at all since my body skipped 1st and 2nd stage labor and barreled right into transition. It was an intense experience and I own(ed) it. I think taking the time to educate ourselves on our decision to homebirth, choosing LeAnn for our care provider, as well as taking The Bradley Method birthing classes helped us adjust to the surprise that was Silvan’s birth. I’m so happy with how that day went, and I will always remember it proudly. I will also never stop being thankful to LeAnn for sharing in that precious moment with us. It was monumentally life changing, and I couldn’t imagine a better suited midwife for us to go through that change. My husband, Jake, and I have already talked about it, and if we do decide on another Reindl, we’ll be coming back to LeAnn in hopes of another beautiful birthing event. 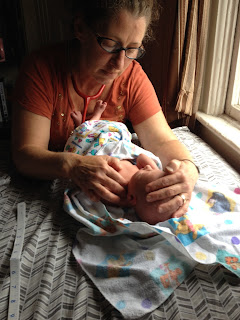